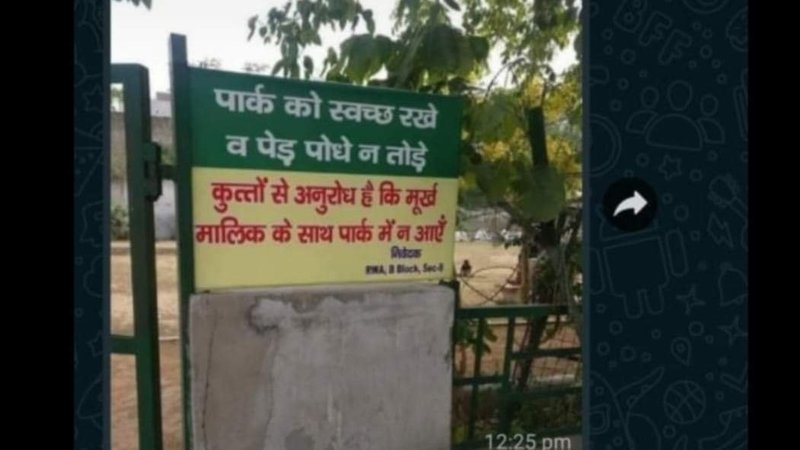 A case has been reported from Ambala, Haryana where two young men very mercilessly tied a dog by a car and dragged him for 2 Km. The dog was already dead when people untied him from the car. When asked why the boys did this to.the dog? They told that he bit many people in their area.

If these are the kind of people the dog bit then definitely they all deserved to be bitten.

Most of the time we humans are responsible for dogs biting us. We provoke them and threaten them hence they bite us to protect themselves. Wouldn't we humans do the same?????

If the dog was rabid then would it be possible for these boys to hold him, tie his limbs and then tie him to the car and drag him so mercilessly for 2 kilometres? To see the two monsters drag the dog kindly go on the link below:

A post has gone viral today on various WhatsApp groups. The caregiver of the dog has in detail written about the most barbaric and inhuman incident which took place in South Delhi . An incident which clearly shows how monstrous we humans have become The reporter (M-+91 858XXXXXX) posted the following message.

“When a dog bites a man, it’s no news. But when a man bites a dog, that is news.”
And what about if a MAN BEATS a DOG? To death?

Before scrolling, I REQUEST you TO READ the STORY OF JACK.

I am a resident of Safdarjung Development Area.
On Sunday evening, January 10, at about 5:30 pm, I got alarmed after I got a call about a dog in my neighbourhood, who was brutally hit on his head and was severely bleeding from the mouth. I immediately rushed to the spot. When I reached there, I saw the dog, Jack (a name given by us) in an unimaginably painful state, unconscious, getting fits and bleeding continuously. His skull was covered with a plastic bag and his hind limbs were tied with a white cloth. That state was horrifying, I cannot even imagine how cruelly Jack was hit.

When I looked around that area, I could see dragging marks. Assuming, Jack was hit inhumanely and then dragged for about 20 meters with his hind limbs tied. The starting point of the dragging marks was covered with a good amount of mud. Now imagine, to what extent Jack would have bled that the whole amount of mud was red due to absorbing blood.

I tried to call multiple medical facilities for ambulance support but the day being a Sunday, none was available. So, I quickly got my car and with some help, I was able to keep Jack in the car to take him to Friendicoes, Defence Colony for the immediate first line of treatment. The doctors there, immediately put an IV as he was getting continuous fits and was in immense pain.

Here, before moving forward, I would like to mention that after keeping Jack in my car, when I got in the car, a man came near my car, looked at Jack and said to me "you have to tell everyone that he (Jack) was hit by a car". I didn't pay much attention at that moment as I was in a rush to immediately reach the hospital.

The doctors suspected severe brain damage due to trauma as a cause of repeated hitting by a blunt object. They suggested to bring Jack back the next morning with an x-ray and blood test reports. He was in a very delicate state and still unconscious. I then took the poor baby to another vet care for further treatment & boarding facility; Pets & Vets, Amar Colony, Lajpat Nagar.

There, the doctors said that the survival chances of Jack is very bleak as he was continuously bleeding, getting multiple fits and was in coma. Imagine how brutally that helpless soul was hit. His body was turning hypothermic (body getting cold as the temperature was 96.3 degrees). The doctors suggested to put him to sleep as he was in an unbearable, unimaginable pain. But I had some hope in me that he might survive (as by then his body temperature was rising). He was a healthy dog let me tell you. So, I left him in the medical care for observation overnight.

I obviously couldn't sleep the whole night. I got a call at about 4:30 am, unfortunately, Jack had left for his heavenly abode.

Next day, after cremating Jack's body, I went back to the spot where the incident took place. To get an idea of the real situation. What could have gone so wrong that a poor being was beaten to death (in a way)? With few versions that I got from people, I got to know that he was beaten by a man repeatedly with a lathi on his head. And then dragged to cover up the spot of this brutality.

Upon further inquiry, I ended up meeting an eyewitness; a local of that area. He told me that he saw Jack lying in a pool of blood. He got terrified with the site. Jack was lying unconscious by then. He then saw the man again coming out of his house and when the man saw that Jack is still breathing, he picked up the lathi and again hit Jack brutally, repeatedly (for about 8-10 times) on his head until Jack coughed blood. How in senses a decent man could do that? The person told us that the man is Mr. Negi who is an alcoholic. He has got into arguments randomly under the influence of alcohol earlier as well. Allegedly, Mr. Negi then dragged Jack to clear out his porch and left him to die in a ditch in a park nearby.

I still get chills while writing this.

And to mention, the man who came near my car claiming that Jack was hit by a car was none other than Mr. Negi, covering his deeds.

On different accounts, I got to know that there have been few complaints against this hooligan for his intimidating behaviour.

I tried my best to save Jack. I cannot bring him back, but I can urge the authority to serve him justice so that his soul can rest in peace. A strict action against Mr. Negi should be taken so that no other animal ends up like Jack. Or any other person has to face this monster.

I have booked a complaint against Mr. Negi with all the proofs I had. But social media has its own power to help in accelerating the justice.

I urge each one of you who go through this post, SHARE this as much as you can so that the voice of Jack can reach people and hooligans like Mr. Negi think twice before committing such a heinous act.

RWA has played havoc on caregivers and the dogs of the colony. In recent times they have become very powerful. They have come out with their own solutions to curb stray dog populations. From putting boards of not feeding the dogs, to dogs not allowed in parks. They have relocated them, thrown them out of society and even killed them. They have done it all. The RWA of an East Delhi colony has been troubling the caregivers and the dogs again and again. They want to remove the dogs from their locality so.they not only trouble the dogs but also mentally harass and torture the caregivers. They have put up boards (pic in the post) in the parks which says "we request the dogs that they do not enter the parks with their foolish  owners"

Out of the three incidents mentioned above two have happened in Delhi, the capital of India. If the capital is so unsafe for animals and their caregivers then what can be said about other parts of India.

It's high time the central govt came out with stricter animal laws because the Indian masses have lost compassion for animals. They have no love for animals nor they have any fear of law. And there should be special provision made under law for RWA members who indulge in animal abuse.

The other day a Hindi TV channel was defending a man who mercilessly killed a calf. Will it defend these people too?

God knows what's the other side of the story of these inhuman people but they definitely deserve to be punished.

4 APR 2021 —  The Rajasthan Governor Kalraj Mishra has adopted a stray dog and ...
Dog dies after sexual assault in Punjab; Temple...

31 MAR 2021 —  We have witnessed dogs being burnt alive, smashed against wall l...
The message of the pandemic

Elements of Nature like water, air, fire, plants and animals sustained our existence but an exploita...
Dog butchered to death in Jalandhar; caregiver harassed...

20 MAR 2021 —  A friendly dog was brutally murdered by dog haters in Jalandhar,...
Men derive sadistic pleasure by running a bike...

19 MAR 2021 —  While our honourable members of parliament are pleading for stri...
AWBI writes letter to stop dog cruelty in...

Link to article   A letter dated 3 rd March 2021  has been sent by the Secretary AWBI OP Chou...
Dog tied to a bike and dragged; Woman...

Link to article Two people in a bike in Surat, Gujarat were seen dragging a dog tied to their bik...
Dogs being murdered in the name of ABC...

We have witnessed dogs being murdered by being poisoned, burnt alive, beaten up with sticks and even...
In Delhi anyone is free to make their...

Few boards have been put in the Patparganj / Mayur Vihar area in East Delhi which says not to feed b...
RWA harasses caregivers in Delhi; Humans assault dogs:...

Nothing can be more shameful than what is seen in the two videos which I will be sharing in this pos...
Human cruelty against dogs in Bengal and Gujarat;...

A dog was mercilessly beaten with a stick by a cruel man in Jalpaiguri in West Bengal. It's unbeliev...