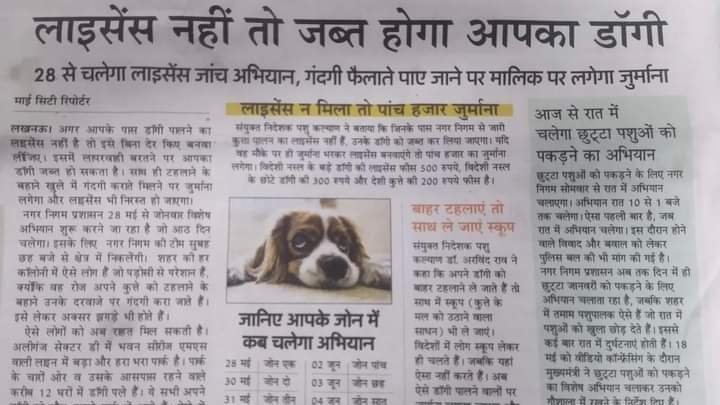 In Bareilly, Uttar Pradesh a man was caught red handed relocating a puppy. Had it not been the brave caregiver the puppy would have been thrown out of the colony. According to the caregiver, the culprit has been killing and relocating dogs in the past.

A dog by the name of Rocky was shot by a man in Noida, Uttar Pradesh on 26th night. The caregiver / owner tried to file an FIR at the police station but the police didn't do it instantly. It was after a lot of persuasion that an FIR was filed. But the culprit has still not been arrested. Rocky was fortunate enough to have survived the bullet shots. He is currently in a shelter named House of Stray and its owner and founder Sanjay Mahapatra has given a full report of the case to a journalist. The link is given below:

The state of Uttar Pradesh is not very dog friendly. The dogs are openly killed, relocated and abused. There is no fear of the law. It will be more appropriate if we say that the people are not even aware of animal laws. So obviously they have no fear.

And to add to the misery of dogs and its owners the municipal corporation of Lucknow is now going to penalize owners who have not got the license of their pet dogs. The penalty will be Rs 5000 which the owner will have to pay if he doesn't want the corporation to take away the pet from them. The license fee is Rs 500 for foreign breed big dogs, Rs 300 for foreign breed small dogs and Rs 200 for Indian breed dog. Also if the owner is found not scooping the poop of his dog from roads and parks then again he shall be penalized. To catch such owners the corporation has started a special drive for eight days where the corporation team shall visit the various zones at 6 AM so that they can catch the owners red handed not cleaning the poop of their dogs when taking out their dogs early in the morning.

Well there is no harm in making a pet dog license mandatory and there is also no harm in asking the owners to scoop the poop of their dogs but in a state where people fight with caregivers for feeding stray dogs, where people openly shoot dogs with their pistols and the police hesitates to file FIR against the culprits and where small puppies are put in sacks and relocated and killed. Just how justified is this lop sided policy for dogs? Has the corporation chalked out any plan for sterilization of stray dogs, whose number is many times more than the pet dogs? Has the corporation chalked out any plan for vaccination drives of stray dogs so that they may make their state canine rabies free? Has the corporation come out with schemes for stray dog adoption?

A sick Labrador was abandoned by its owner in the state of Maharashtra. The owner neither wanted to put money nor time on the treatment of his dog therefore he abandoned him in the middle of a road to die. To see the poor dog kindly go on the link below:

When will the municipal corporations of India realize that what India needs is a carrot approach and not a stick approach towards dogs and their owners. The mindset of the people needs to be changed toward dogs. There are owners who buy dogs from breeders for status and not for the love for dogs. So when the dog is old or sick they just abandon him.

The current policy of the Municipal corporation of Lucknow is not going to encourage people to adopt dogs rather it may lead to the abandonment of pet dogs and man-man conflict.

It's high time the govt devises policies and schemes which reduce man - man and man-dog conflict and not increase it.