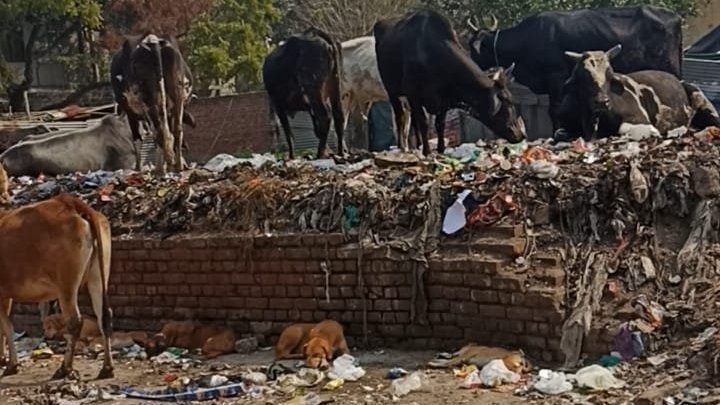 The previous post was about the insensitive and apathetic policies of the Municipal Corporation. That is how the EDMC  is converting the leftover food and green vegetables into manure while thousands of stray animals are going hungry on the streets of Delhi.

Khichdipur is a colony in East Delhi where people from low-income groups live. At the outskirts, one can find clusters of slum dwellings as well. Right across there is a hospital by the name of Lal Bahadur Shastri and an MCD office. The people living in this area are not aware of the ABC program. The dog population is quite high and stray cattle roam on the streets. Both dogs and cattle look for food in the garbage. But unfortunately, they find nothing much to eat there. They are often seen eating dirty, stale and rotten things including plastic (pic in the post).

Just half a kilometre away the EDMC has installed composting machines to convert leftover food and vegetables into manure. Nothing can be more inhuman, absurd and foolish than this.

Just what kind of policies are our municipal corporations making? They are so blind to the suffering and pain of our stray animals. The food which is being converted into manure could be used to feed these hungry souls. The money which has been spent on the installation of composting machines could be used to install food stations for these stray animals.

Shanti (M+918929307936) a resident of Mayur Vihar and a caregiver herself could not see the plight of young puppies and dogs who were surviving on the garbage of Kichdipur. According to her, more than twenty puppies live on the pile of garbage (Pic in the post). In dirt and filth as if already dead. Many being trampled over by the cows who also stay there.  Shanti saw more than forty unsterilized dogs there. So-called the nearest ABC centre in Gazipur to get the dogs picked for sterilization but they refused to say that they are not free. So she took the help of the PFA Founder and Member of Parliament Maneka Gandhi who called the ABC centre and arranged for the pickup. In a span of just a week, Shanti got 20 dogs sterilized. She sent dogs in two batches of ten dogs each. The last batch she sent was on 10th February 2022.

What if Shanti had not got the dogs sterilized? Their population would have continued multiplying. The residents of Khichdipur are not aware of the ABC, hence the dogs are just multiplying.

When will our municipal corporations create awareness about the ABC program? When will they stop wasting money on projects which do more harm than good to our street animals?

In Kudachi Belgaum district in the state of Karnataka, the dogs are being relocated. In the absence of the ABC centre, the corporation is controlling the population by throwing the dogs out of Kudachi.

Will someone ask these insane administrators that by relocating the dogs how are they controlling dog population?  Won't the dogs multiply anyhow?