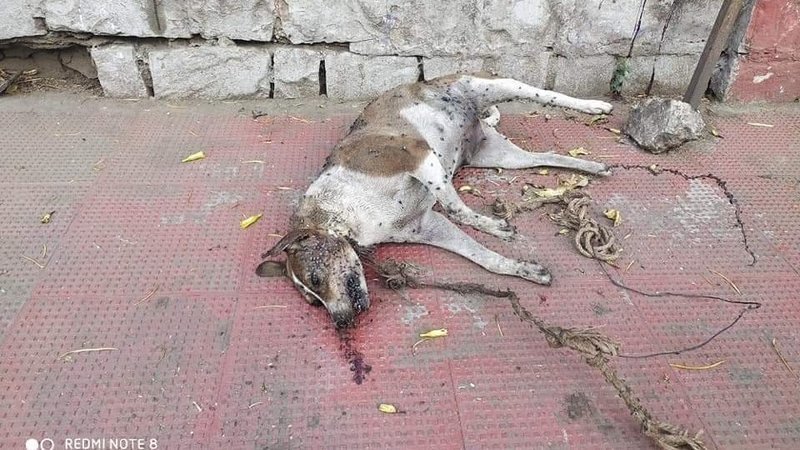 A dog was beaten mercilessly and then strangled to death by a rope tied to his neck (pic in the post). This incident took place in Talaiya, Bhopal, Madhya Pradesh.

A mother dog is howling and crying for her lost puppies. She is looking for them everywhere. But some devils have taken her pups and dumped them to die. This has happened in Pitampura, Delhi. The caregiver is looking for the pups everywhere but the problem is that no one knows who committed this sin. This act is not only sinful but also illegal. People have no humanity left in them but there is also no fear of law either. The problem is that people don't even know this law that relocation of dogs is an offence. To watch the poor mother cry for her babies kindly go on the link below:

Amul van has crushed a dog in broad daylight under its wheels. They could have easily avoided the accident but they deliberately ran over him. Amul is a world famous brand for dairy products right from milk to ice creams. It is one of the biggest cooperatives in India and that too one making good profits. But just see how pathetic is the attitude of Amul transporters. They don't have the basic courtesy of driving in a decent manner. While their livelihood depends on cows and buffaloes but just see their attitude towards the street animals. These transporters didn't even bother to check on the victim.dog.  Whether he died or not died was none of their business. No guilt and no remorse. The good news is the accident got recorded in the CCTV camera and the Ghaziabad PFA president Surbhi Rawat has filed an FIR against the culprits.

The least Amul company can do is teach their employees empathy towards animals. After all they get their salary and run their families because of Indian cattles.

Just watch another accident victim in Aurangabad, Maharashtra whose jaw is broken.

Shouldn't the transport department and ministry both at the centre and state level put boards on roads and highways requesting people of India to drive carefully? Also telling them that killing an animal under the wheels is a legal offence.

Sewa Nagar in South Delhi had govt employee residential flats. Now the govt is demolishing those flats and making news ones or may be renovating the old ones but the problem is that the people residing in those flats have all left the flats and gone elsewhere. The problem is now for the dogs who used to depend on those residents for their food and water. This is the message which has gone viral on social media:

Shouldn't the urban development ministry made provisions for these voiceless animals before getting the houses vacated or atleast communicated this negative impact of theyr decision on.the fauna to the ministry of Animal Husbandry???? And what is the Ministry of Fisheries, Animal Husbandry and Dairying doing? Are they even aware about this situation?  For these animals too it is the caregivers who are under stress and trying to find some solution.

RWA president of a residential society of Ghaziabad had ordered the society guards to relocate a dog. The PFA Gaziabad president Surbhi Rawat caught the guards red handed and stopped the relocation. She had given a written complaint against the RWA president. Such presidents should be suspended from their posts from immediate effect. They are neither humane citizens nor law abiding citizens.  This incident took place in the month of January 2021

In Karnal some human devils deliberately broke a temporary bridge which was made by caregivers for feeding the dogs. This is a non residential.area but still there are human devils who enjoy troubling the animals and the caregivers. They enjoy the dogs being starved to death.

From what we see is that all Indian.ministries are doing their jobs, right from transport ministry to urban development ministry. Highways are being built and roads are being built so.also new buildings are being constructed and renovated but what about the ministries which are entrusted with the job of animal welfare. What kind of welfare is happening for animals in India one just fails to.understabd?

People of India are becoming cruel day by day.  There is no amendment of animal.laws yet and the ABC program for controlling the dog population is just on paper because everyday dogs and pups are being relocated. That's the way people of India are controlling dog population. Either by killing them or by relocating them. And if they can't do both then they like to starve the dogs to death and make the life of caregivers a hell.  In practical sense the ABC program is not being done in most parts of India and where it is being done it's done in the most random and unsystematic manner.  Delhi is the best example of it.